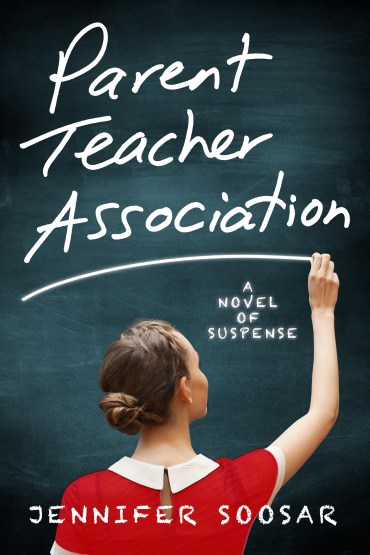 Jennifer Soosar watched too much ‘America’s Most Wanted’ growing up and has been writing about shady characters ever since. She was born and raised in Toronto and has a degree in anthropology from York University. Her short fiction has appeared in Ellery Queen Mystery Magazine.
She is a member of International Thriller Writers, the Crime Writers of Canada, and Sisters in Crime.
For more information about Jennifer, you can find her online at:
Twitter: @jensoosar
Facebook: @parentteacherassociationnovel
Tell us about the road you took to write and publish your first novel, Parent Teacher Association.

Since childhood, I had written a lot of screenplays and short stories, but never a novel. A novel always seemed like such a daunting project. “I’ll get around to it one day,” I told myself. Once my kids were older, I discovered I had more free time so it seemed like the best opportunity to finally give it a try. The first idea that popped into my head was “why not set the story in an elementary school?” I outlined a basic story with conflict between two characters—a parent and a teacher. The whole thing grew as my imagination took the concept to a much darker place than your typical school environment, but I think that’s what makes it fun. I can admit, I was a bit of a ‘helicopter mom’ (like my parent character Naomi) when my kids were little. I had some fears letting them go out into the world. Writing the novel allowed me to purge a lot of that.
While hammering out the first draft during the late summer of 2014, I was excited to learn about the annual ThrillerFest conference in New York. One of the best things about it was PitchFest, an opportunity to pitch your novel to literary agents. I quickly signed up for the next one in July 2015 because I wanted to give myself a hard deadline. I now had nine months to produce an 80,000 word manuscript I could sit across from agents and pitch. There was no going back now. I had to finish this book…and it had to be good!
The deadline weighed constantly on me. Between mini-panic attacks of “what have I done?” to doubts that I could deliver, the deadline ended up being the best favor I could have done for myself. There was absolutely no way out (well, technically, I could have cancelled the whole thing and gotten my money back but that would’ve sucked). I had to ignore the negative, skeptical thoughts and just keep pounding the novel out. Months went by and it started to take shape. By late June 2015, I finished what was probably the fifth or sixth draft of it. It was finally ready. It was time to head down to New York City.
ThrillerFest was an amazing, positive experience and I learned so much. I ended up pitching Parent Teacher Association to ten different agents and nine of them asked to see more. While I didn’t end up landing an agent, I did meet a fellow author who was published at Black Opal Books.  Later in the fall, I queried a few publishers, including Black Opal. Five months later, in March 2016, the acquisitions editor at Black Opal said she was delighted with Parent Teacher Association and wanted to publish it. I got a contract in the mail a few days later.
To return to ThrillerFest in 2017 as a Debut Author is an amazing, satisfying feeling. Every bit of hard work, sweat, and tears was worth it to get here. It’s also great to be on the other side of the project, stepping into a brand new world as an official, published author.
What are you working on now?

I’m working on a crime novella called Cayo Cuba. It’s a noir-suspense set on the tiny island of Cayo Guillermo on Cuba’s north shore. I’ve travelled there four times and was inspired by the resort workers and the fact that Ernest Hemingway had spent time on the island. In fact, Cuba’s best beach, located on the tip of Cayo Guillermo, and is named after Hemingway’s boat, Pilar.
The tagline: ‘A mysterious blonde manipulates a restless dancer to perform a dirty deed in exchange for freedom.’
I realize it’s an uphill battle for a new author to find readers and fans so I’m writing Cayo Cuba as a promotional giveaway for Parent Teacher Association (with an excerpt and buy link at the end!) I plan to have this novella ready for Bouchercon which takes place this coming October in my hometown of Toronto.
Final words of wisdom?
Inspiration for stories is everywhere, and ideas come in little scraps. You gather up these scraps, combine them and your imagination turns them into a bigger idea. Since there’s no predicting when a scrap of an idea will come, you always carry a small notebook with you. I love mixing unrelated scraps of ideas because the outcome can be something you never would have thought of.