Day three of Thrillerfest was so jam packed with events it’s going to require two different posts to cover it all. 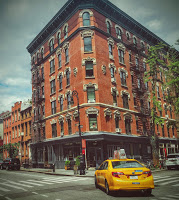 The day started early. The Jane Hotel is charming and cheap – and way down south in the West Village, so I had a trek to get up to the Grand Hyatt. I didn’t want to be late, or be a hot sweaty mess in the NYC summer humidity, so I got a cab.

I love NYC cabs. Hailing one makes me feel like a grownup.


Since it was Saturday, I zipped up and across town in record time, arriving well before our early morning event.

So many great new authors! Click this link here for a complete list of the 2015/2016 Debut authors.

We started at 7:55. My fellow debut authors and I were curious about how many people would come out to support a bunch of lesser known writers first thing in the morning – especially after the cocktail party the night before – but the room was packed. 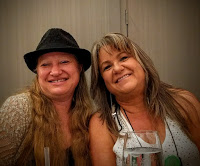 Sitting up on our dais felt like being a part of the biggest bridal party reception ever.

After introductions by Steve Berry, we all got to pitch our books to the room. It was a blur, but my fellow debuts told me I was coherent, so there’s that to be thankful for.

After finishing our breakfast event, I went to Drugs, Bombs or Weapon Detection: K-9 Dogs in Thriller Novels. Cat Warren is one of my favorite speakers, so I was excited to hear what she had to say. And there’s nothing better than seeing an active duty K-9. I had the chance to speak to Special Agent Ryan J Christie and meet his dog before the event, but he asked that we not post photos of them. I will just report that the dog and his handler were both adorable.

Next up Two Ladies Having An Adult Conversation:
Spotlight Guest Gillian Flynn Interviewed by Karin Slaughter. 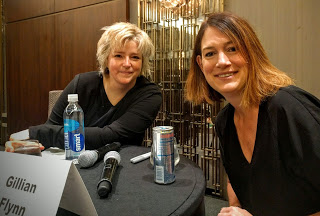 “We root for bad men and hope bad women get murdered.”
—Karin Slaughter
Fantastic interview. Who knew these two ladies were so funny! They’ve been friends for several years, so it felt like we were listening in on a gossip session over cocktails. They were also very gracious about posing for a picture. Here are some highlights from this marvelous event.

Gillian Flynn, world renowned for her book Gone Girl, appears publicly on a regular basis. In addition to seeing her at Thrillerfest, I’d seen her in person at a sold out Town Hall meeting in Seattle. It turns out she was cripplingly shy as a child. She’s still “situationally shy” as an adult. Some types of public appearances bring that social anxiety back for her. I get this. I’m very outgoing, and most people think I never suffer social anxiety, but certain kinds of events are difficult for me too.

I’m also pleased to know that Gillian is not an outliner, she starts with a character or an image. I write this way, so that’s two things I have in common with her. I love that!

Karin asked Gillian what it was like to have to follow Gone Girl with another book. She said she had to consciously think about how she wanted to write a great book – but not rewrite Gone Girl. “Never try to replicate that,” she said about her breakout novel. She feels her biggest mistake would be to try to write that book again. She said she “didn’t want to write a book because it’s what (she) was supposed to write” to follow her wildly successful third novel.

Discussing her influences, Gillian mentioned her dad taught film and she was exposed to a variety of grownup movies very young in life. This included Alien, Psycho, and Bonnie and Clyde, viewed at the age of seven. Add in a mother who taught reading and Gillian’s desire to write and success at writing dark stories, makes a lot of sense.

One of Gillian’s favorite books as a child was The Westing Game by Ellen Raskin,  which made her want to write mysteries. I wasn’t familiar with this book, so now it’s on my list of books to read.

Gillian spent ten years writing for Entertainment Weekly Magazine. When asked about her writing process, she said “I was covering the Lord of The Rings, then I’d come back to the hotel and kill a child, then write – so that’s part of my process.” (Laughs).

One of the things that struck me both times I’ve seen Gillian speak, is how down-to-earth and funny she is. Warm, thoughtful, and charming, it’s fascinating to think about the dark places her mind can go. But we’re all very glad it does.

Check back for Part II of Day Three

Pursuit of the Truth: Harlequin Intrigue