In April, 2014, an emaciated horse came into Serenity Equine Rescue and Rehabilitation. He was brought in with another horse from a kill pen in Enumclaw, where he was destined to end up transported across the border to Canada and turned into dog food.

He was so wild and so far gone physically, the vet feared he would not survive. This tall bay refused human contact, attempting to kick that same veterinarian through the back of the barn. This is what he looked like when he came in… 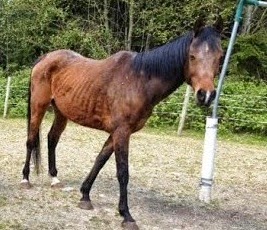 Hard to believe an animal this skeletal could still kick, but his anxiety level was so high, and his startle reflex so reactive, he would overcome his physical limitations to lash out at the world that had almost killed him.

My first meeting of this 12-year-old Arab gelding occurred that very first day he spent at Serenity. I worked on Tuesdays, cleaning paddocks, filling waters, then at the end of my shift, feeding and moving horses into the barn. On this particular April afternoon, I discovered the two new horses in a paddock at the top of the rise. When new animals came into Serenity, I would let them decide how much we’d interact. I’d come quietly into their area and begin to clean up. If they came over and wanted interaction, I’d pet them, if they stayed away, I would move carefully around the space, giving them all the room they needed so as to not feel chased. If they became aggressive, I’d get the hell out of the way.

The gelding came over fairly soon after I started. He walked directly toward me, but with his ears high, eyes soft, and with no aggressive actions. I paused to see what he would do. He leaned his forehead against my shoulder and breathed out, as if to say he’d found his home.

It wasn’t until much later I learned this horse was considered aggressive, potentially dangerous, and that he didn’t want anyone to touch him. I thought at first people were joking, because that wasn’t the horse he was with me. I’d spent almost thirty minutes that first day scratching his neck and withers, while he stood quietly, leaning into my hand.

We named him Second Chance and I adopted him four months later.

In October, I moved him to his new home. Here’s Chance today… 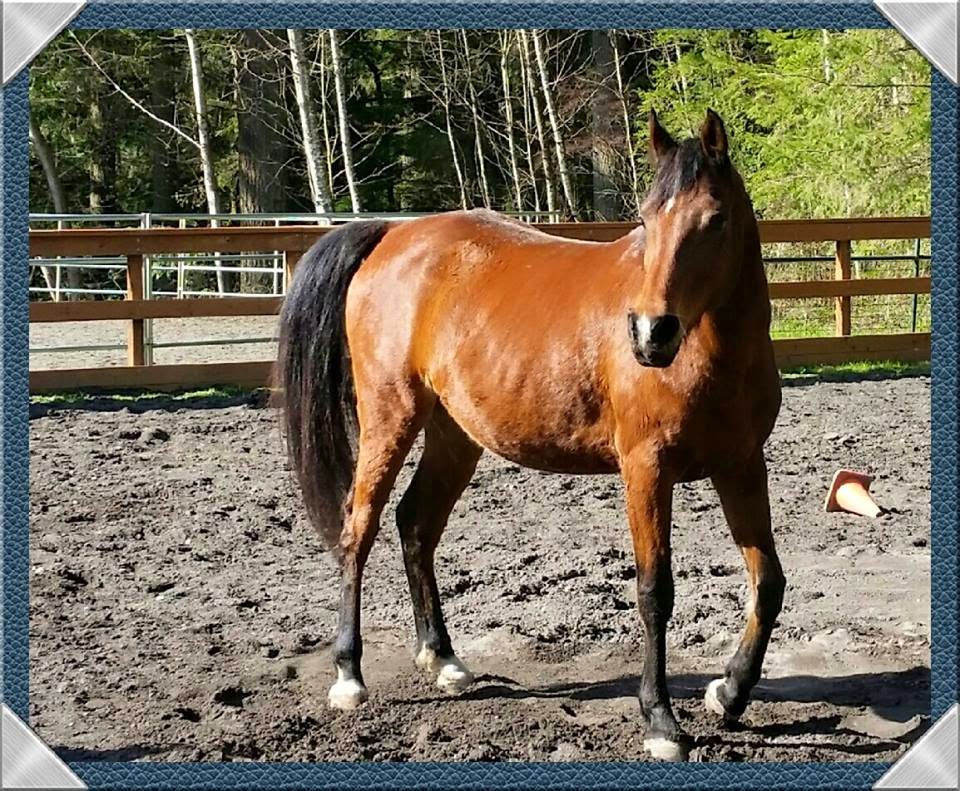 What, you might ask, does this have to do with writing?

Adopting Chance started one of the most amazing years of my life. I (mostly!) stopped worrying about my ability as a writer, Chance didn’t care. I stopped worrying about success, because no matter what, I could go over to the stables and play with my horse. But, the same month I moved Chance to his new home, I got the call that my first novel would be published and it was being contracted as a series.

I don’t believe in coincidences.

One of the lucky lunar months in the Chinese Year of the Horse is April. It was lucky for me last year. It was lucky for Chance. With the help of two experienced followers of Natural Horsemanship and the support of my husband, I’ve spent hundreds of hours working with Chance. He now walks calmly from the paddock to the barn. Stands while I pick his hooves and groom him. Responds to requests in the round pen and the arena. He’s not so excited about moving sideways, we’re working on that. I have not yet ridden him, but we’re getting close. It’s a lot like writing. Some days everything goes right. We pick up where we left off the day before and move forward in our new “draft.” Other days, we both muddle around, not quite in sync, and we have to rewrite the work we’ve already done.

But here we are one year later and I wouldn’t change one single thing.

Check back next week for the next installment on the Year of the Horse.
How is Natural Horsemanship like grammar?